I feel like I’ll fall into the minority when I make this claim but… I’m not a huge fan of the ocean. I mean, I like the ocean, I like seeing it, smelling it, being on a boat on it, but I don’t much like swimming in it and I’m not all that fussed on hanging out on beaches either. So when the opportunity came up to go camping on a river, I just about lept out of my seat. I LOVE rivers, they’re my favourite, and I have no real idea why. Maybe they’re less sandy (although dirtier) and they’re not as salty or rough, but if I had to take a stab at why I prefer them more, it’s probably got something to do with the temperature and they’re a heck of a lot quieter!

In late January, 2019, I spent a few days camping on the Shoalhaven River at a campsite called Coolendel. Despite the fairly hefty price for camping (considering the lack of- though good- amenities and the 45 minute drive along a dirt road to get there), it’s a beautiful, large and quiet spot.

West of Nowra, it took about 2 hours from Wollongong to get there so I’m guesstimating it would be approx. 3-3.5 hours from Sydney. There is, as I just mentioned, 45 minutes of dirt road, but it was easy to navigate in my 2 wheel car, and my folks managed to get their 2-person Avan camper there with no issues. It does have a little shop where you can buy ice, ice-creams and basics, but it’s not a place you can easily access anywhere else. There’s not ‘popping into town for a bit’ or just ‘ducking to Woolies for bread.’ It’s therefore the type of camp spot that once you arrive, you stay there.

The space of the site itself is quite large. We managed to find a very large space between the three cars we had (2 vans and a tent) all to ourselves, though we were far from the amenities (say about a 3 minute walk, if you call that far). It appeared to me based on what I saw others doing, that if you weren’t camped near the loos, you could drive yourself up there and back. Near the main amenities building were also some bbq’s. There were also 2 entry points for the river that had quite a different feel. We were closer to the less popular entrance, which was a bit steep and rocky, but quiet. There was a lovely gentle sloping river bed itself into deeper water and you could easily swim from one side of the river to the other with no noticeable current at the time. This was also the entry to take you canoe down- if you have one, which we did. The other entry point was down a few sets of stairs near the main camp ground (you can also drive to a small makeshift carpark instead) and had a greater buzz to it. There were some teeny rapids you could float down and a few rocks you could climb and jump off. There were also pockets of the river bank where you could nestle your family for a bit of privacy but it was definitely a more happening area (again, don’t think there is somewhere soft and sandy to stretch out your beach towel and sunbake… it’s a river… no sand or really level ground.) 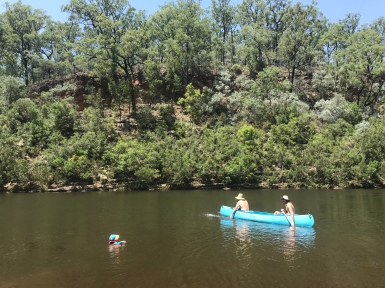 Let me state here that there is no riverside camping. You cannot see the river from where you camp though you are nestled amongst the trees and the wildlife (especially peacocks and goannas) are abundant. Grady’s Riverside Retreat– closer to Nowra on the same road, does boast riverside camping, though I haven’t been there before. Regardless, I thought this was a great campsite to take children. Despite the fact we chose the hottest week of January to go (think 40 degrees sweltering heat that doesn’t cool down until 10pm) and me having to drive my baby around the campsite in the air-conditioned car in order to get him to have a nap- it was just too hot otherwise- this is a really family friendly place that, because of it’s somewhat isolation, almost forces you together for the entire time. What I also appreciated was the total lack of reception (my husband wasn’t so fond of this as he wasn’t with us) but it was nice to focus on each other and the children without the distraction of phones and tablets, etc. 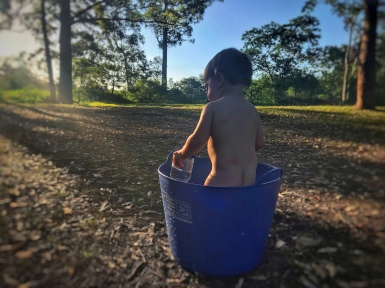 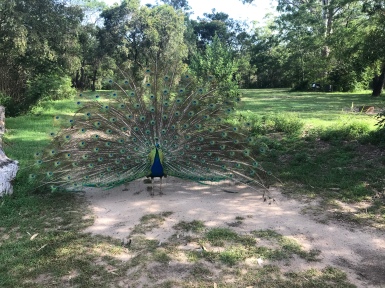 Traveling with my brother and his wife, we had three boys under 3 between us- and they loved it. Covered in dirt (and sweat) almost the entire time and free to roam, collect bugs and play with sticks (it was simply too hot to have a bonfire) they seemed to love the freedom and then cooling off in the river with a temperature that just perfect to be refreshing but also comfortable to laze about in for hours at a time. We danced, played games, had ‘bush baths’ and enjoyed the river and each other’s company without being disturbed by others and all with a very natural feel to it. I can’t wait to go again! 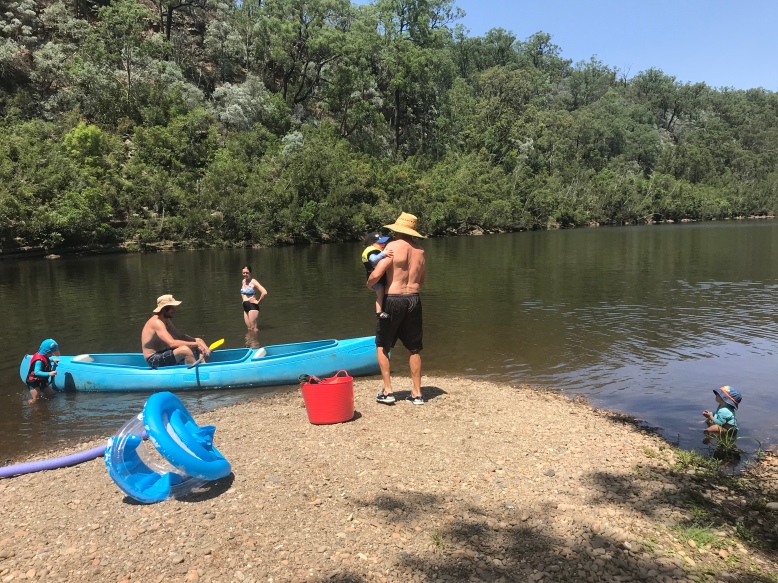